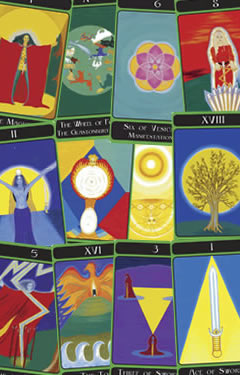 The tarot is an ancient system of self-knowledge that uses symbols and colours in order to help us access information that is hidden within the subconscious mind. The images, in sequence, track a pathway through the journey of the soul – from the trust and innocence of The Fool to the wisdom, joy and spiritual liberation of The World. The cards reveal the tests, trials and triumphs along the way, which we as human beings encounter in our development of the knowledge of who we are.

Fire relates to action, to inspiration and the use of the will. Water relates to the emotions and the intuitive aspect of ourselves. Air relates to the mind, to the processes of thought and intellect, which can be divisive or unifying. Earth relates to the ‘grounding’ or manifestation of our energy, and to material considerations.

The Glastonbury Tarot follows the sequence and symbolism of other traditional tarot cards, but contains within its imagery the inspirational myths, legends, historical figures and sacred sites which abound in this very special area. Glastonbury has been known by many names. It is the ancient Isle of Avalon, the entrance to the Otherworld, a place of magic and mystery. As Ynys Witrin, the Isle of Glass, this place acts as a mirror, which, when you look into it, shows your soul, your deepest self. Glastonbury has been known as the Isle of the Dead, where secrets are revealed, and as the Isle of Apples, because of its many orchards. It is linked with the Summerland, the beautiful place where souls go to rest.

Since ancient times, when Glastonbury was an island, surrounded by water broken only by lake villages rising from its depths, the area has been richly steeped in history and enigma. Pagan traditions flourished here, co-existing with the first Christian church in the Western Isles which was founded by Joseph of Arimathea, the uncle of Jesus. Druids trod their paths through groves and lines of oak trees. Heroes and warriors came here. Saints and seekers of truth journeyed to its shores, and it was long known as “the holiest earthe in England”.

As the Isle of Glass, Glastonbury is seen as a mirror which enables seekers to look deep within their hearts, and truly know themselves. It is a place of visions. The light has an unusual, luminous quality which attracts the eye to look deeper, to go within as well as feast itself upon the haunting beauty of the landscape.

Throughout the ages, Glastonbury has been a place set apart – a refuge, the entrance to the Otherworld and the Underworld; a land where time moves different courses, and where realities can shift and merge to birth new and wondrous images and revelations. In this unique area is embodied all the archetypes and symbols that are found in the tarot. These are encompassed within the landscape and in the mysticism of earth-lore; in the Arthurian legends, and in Christian history. All paths meet and merge here to form a rich tapestry, the weft and warp of human existence and experience.

Within The Glastonbury Tarot cards is a blending of philosoph­ical paths within the context of the landscape. The illustrations depict the history of the area through Pagan, Christian, and Arthurian figures, reflecting the marriage of belief systems in this small area of land which is a melting-pot of ideas and ideologies, a cauldron of inspiration which feeds all who come here.

Glastonbury breathes spirit through the air which caresses her land. But the energies here also provide an anchor which clarifies and ‘grounds’ who we are, and what the individual purpose is for our lives. As the magical Isle of Avalon, Glastonbury embodies the place of mystery and beauty that exists within the human heart – no matter where you are geographically. The journey through The Glastonbury Tarot is the journey we all undertake through life, focused and concentrated within this area of land, but relevant everywhere.

Before you read the interpretations of the cards that you select for your reading, it is recommended that you just sit quietly and observe what each image reveals to you. If you allow the cards to speak to you, you will be able to access the land of deep inner knowing that resides within each of us.

If you have enjoyed the cards and would like to show your appreciation, you can make a donation to Lisa and Graham, for the cards and the website. Thank you 💙💚💛

If you have enjoyed using our website, please tell your friends about it.